[UPDATED POST] Stephanie Griffin spent nine years in a mystical movement and trained in all the practices. Even though she had been a lifelong Christian, she didn’t see danger in the exercises promoted, such as Contemplative Prayer, Lectio Divina and walking the labyrinth. She was surprised that they teach Christians to respect the Bible while regarding all worldviews as equal paths to immortality.  She finally learned the roots of the movement and took a stand to come out. Our new film Mystified is a companion to Charmed By Darkness and Beware of Angels. 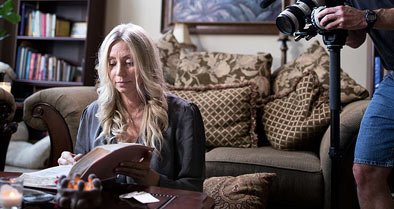 Stephanie told us about how her now husband (Dondi) met Roger Morneau back in the 90s. During a personal crisis, Dondi drove seven hours – without an appointment – to knock on Roger and Hilda’s door. They invited him inside, and Roger spent five hours sharing the treasures of his dynamic prayer life… Dondi’s life was never the same. See the full story in Charmed by Darkness, the life and legacy of Roger Morneau. We had originally planned to include Stephanie’s story in Charmed by Darkness, but God impressed us that the current issues surrounding her testimony would be best presented through a separate, yet related, program. “During a grueling week in California to film 14 different scenes in multiple locations — and their interviews,” stated Founder/Producer Chris Lang, “God worked out the weather, 15 extras to help dramatize their stories and all the logistics in a way that was unmistakable.”